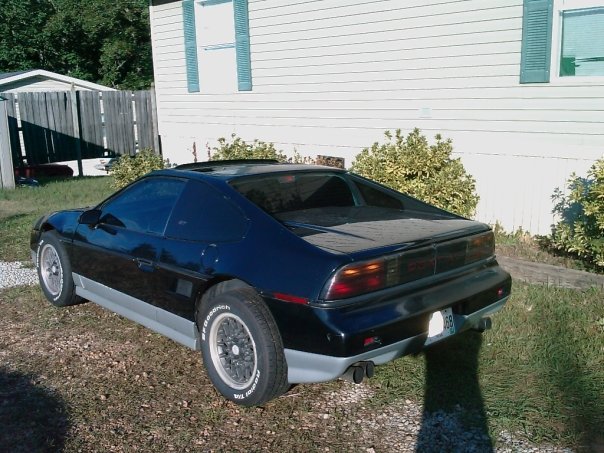 the family and I love car shows. If I get time away from work, I might get to go to some. The fiero isn't show worthy, but I may put in one from time to time

I've been around cars all my life, and have always had an interest in them. my dad and others always had their head in an engine bay, and I has right there handing wrenches. I love working with my hands, so cars and electronics came naturally. My dad is a chevy , GM man. His brother is Mopar or no car, and my dad's best friend/brother-in-law is a ford guy. so you can imagine nascar season :).
u
Me, I never got into nascar. I tend to stick to GM cars, though I love all types and tend to like british cars. I started with 4x4 offroading, then got into the turner seen. naturally, my dad wouldn't let me have an eclipse or and other import, so i went with something close to it but american made...the 3rd gen Cavalier. at one point, I own 3. but the best was the Z24 that I heavily modified, mostly show with a couple of go go goodies. I went one to win a handful of trophies. Eventually, I got burnt out with the car and decided it was time to move on. so I sold my pride and joy for a car I've always eyeballed the Fiero GT. my next car? who knows.... maybe a Mazda 3, newer pontiac GTO or Austin Healey Sprite

My dream cars are an Aston Martin DBS, Aston Martin 177,and '69 Camero ss....oh and of course the EPIC Bugatti Vayron

TOP GEAR IS MY FAVORITE SHOW EVER!!! and realy opened my eyes to imports and cars from over the pond.

what's my plans for the Fiero? right now, just to restore and get the car up to snuff.
future upgrades:
suspension:
lowering springs
poly relacement
sway bars
steering:
anything that can be done to help this poor car's steering
Paint:
nothing fancy, stock black.....maybe white
Loud pedal:
either a 3800s/c swap
or
3.4L 60degree V6 with an ECM swap and maybe a turbo
Transmition
MANUAL

The foster and adoptive parents of Hall County extend an invitation to you to attend our 3rd annual car show on April 27th, 2013! The show location is the Hayes Dodge dealership, 3115 Frontage Rd in Gainesville GA from 11:00 to 5:00 with trophies awarded at 4:00.. All the money we collect goes to benefit the children in foster care in our county. We provide care bags when a foster child comes into foster care with all the necessities like a tooth brush and tooth paste and things like a new toy, a blanket... We also provide Christmas gifts for every child in care and we are looking to start up providing a birthday gift for their special day. We need your help to be able to take care of the 130 or so Hall County foster children. Registration is $15 per vehicle. We also welcome venders. Check out our website and see pics of our other car shows at www.lovehopehealing.com! We hope to see you there!!

The foster parents of Hall County would like to invite you to our second annual car show on May 5th at the Hayes Chrysler dealership in Gainesville. All the money that we make will go toward getting every foster child in our county Christmas gifts.  Last year we were able to get over 150 children something to open on Christmas morning!!

Michael Thies said…
Welcome Andrew!!
Welcome over to our website! I am looking forward to some great photos (and maybe videos) of your Fiero, and others of various vehicles you favor, and events you enjoy, too.
It is good to write about your "wheels" adventures on the blog, as we all enjoy stories from our members.
One of the real strengths of our website is the feature that any member can add events whenever they find one that we have overlooked! You do not have to "submit" through emails or the postal service, etc.
Please invite your family and friends as this helps the site grow and improves your social network communications. If I can help at all with any of your projects, call me at 770-883-0160.
Sincerely,
Mike Thies