By now some of you may have noticed I took a week off. More out of necessity than a vacation. I actually ran out of running vehicles! But that is a story for another time. You have to be a very serious enthusiast when people only know you as John Cuda. I am featuring his story as to the incident that led to his addiction. Next week I may have a scalding story about what happens when you take your car to a dealer for service. Stay tuned.

Story By John Cuda
One sweltering hot summer night when I was 9 years old I was playing on the living room floor with my hotwheels cars.I had a large wall built with a stack of cars and I was ramming my favorite black chevy van with flames painted on the side into the wall of cars to see how many I could knock over each time. After about the 90th pass through the stack of cars I heard a loud pop outside that sounded like a firecracker.

I immediately jumped up and ran out the door thinking my neighbors just scored another garbage bag full of fireworks from their Uncle that owns a fireworks distributor in Ohio. I was not so lucky. 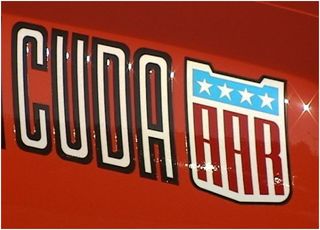 off. It stopped again, I heard another "crack" and saw a flash. I immediately thought that someone was throwing firecrackers at the neighbors houses just to start trouble as usual so I stood there with my chest pumped up on my front stoop ready for anything with my black, flamed hotwheels van in hand.

The car then parked in front of my next door neighbors house, but this time I was able to see more of what was going on due to the streetlight between our houses. Someone inside this car was leaning out of the passenger window and was shooting a small caliber rifle into my neighbors houses. After two more shots, they slowly pulled in front of my house and aimed the gun at me...and being the crazy, fearless wild child weathered by four older Brothers I started yelling every obscenity I knew and I tightened my grip and took that black flamed weapon that previously crashed through giant barriers of matchbox and hotwheels cars repeatedly and threw that thing as hard as I could right handed and side armed at the face of the guy holding that rifle. Just then time seemed to go in slow motion as the black flamed van left my hand.

I saw the passenger duck as the van slammed into the roof of the car just missing his head as it bounced hard up into the air, and then he aimed the rifle at me and fired immediately.I actually felt the bullet whiz past my ear and it got lodged in the brick fascia of my house we later found out. Just then the driver stepped on the gas pedal and I heard the most devastating, awe inspiring, bloodcurdling, and scary sound I have ever heard in my life. Tires were spinning and white smoke billowed, but all I could hear was the sound of this engine under the hood of this half orange, half primered beast of a machine.
All the fear of the gun and my involvement suddenly vanished and turned into a scary, jealous type envy that made me wish I was the one stepping on that gas pedal. As I was standing there in awe I finally noticed my Mother shaking me like Ralphie from a Christmas story after he pounded the snot out of Scut Farkas."Johnny, Johnny, are you okay?" "Yeah, Mom, I'm fine."

Shortly afterwards the cops showed up and took mine and all the other neighbor's statements about the events of the night.As it turns out the punks shot at a cops house up the road and just missed hitting his sleeping baby Daughter's bassinette by inches.

I was proud to mention my award winning side arm throw that almost took the face right off of the gunman, but for some reason the officer told me that I did a bad thing.I had a real hard time understanding that because I was not afraid of those punks.My brothers were harder to deal with than those goofballs.

I ended up testifying against three hoodlums in the courtroom, they seemed to have hired the dirtiest lawyer on the 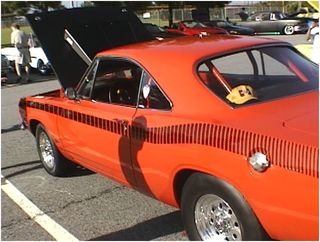 face of the planet. For some reason I did not understand, they got off scott free. From the the courtroom testimony I was able to find out that that car they were driving was a 1970 Plymouth Roadrunner with a 426 Hemi and a four speed as the pictures and courtroom comments revealed.

The lawyer basically had to pry the picture out of my hand when I was asked if this was the car they were driving. I stared and had a half cocked smile on my face as I muttered out the word "yesssss", and later my Mom said I looked just like I did that night when she was shaking me. Since that night I have been branded, bitten by the Mopar bug to the core and have owned and lost some really good creations from Ma Mopar over the years and currently have a sick creation of my own that really makes the purists cringe.
Those local punks with the rifle have been in trouble with the law many times since this incident including busting a neighbors nose to the other side of his face with a giant crescent wrench after following orders from his delusional Dad but through the power of facebook it seems they have all settled down for the most part as of late.

When I first saw this car my reaction was, what a sensible car! It is big but not huge, it will seat six in comfort it has a great stance and presence. It has all the mechanical upgrades that make it a great driver, I could even live with the color. The only thing I would change would be the Instruments. 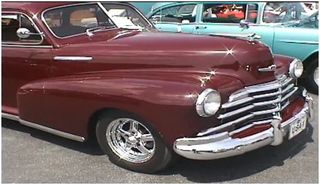 A new body style in 1941, it had to do service until 1949. It took GM a year longer than Ford to come out with their first post war designs. These cars were Americas work horse. Very few of the 1941 production survive and they even made a few during the war as military vehicles. The Fleetmaster was a special model. The regular sedan had a much taller window treatment Making the Fleetmaster and the Coupe Stylemasters look like they had a chopped top. Today Chevy fans are digging some of these cars out of chicken coops and making some very nice Rest Rods and great long distance cruising. Please note a special option on the rear bumper, a center bumper guard or override. The interesting aspect of this extra guard was that they had to design it to fold down to clear the opening of the trunk. If you have bought a GM car in the last ten years or so, you had the option to get the OnStar system. Most people got it for the Cell phone or the Live turn by turn navigation it is much more than that as it could save your life. If you Subscribe, a push of one of the systems buttons will get you connected to a live OnStar Advisor.

Before last month this was only available if it came from the factory as original equipment. Thanks to technical advancements, you can now have OnStar on any of your vehicles, even your hot rod. All of the features except remote lock activation are now in a rear view mirror that replaces the one in your car. It is called OnStar FMV (For My Vehicle) it is available for $299.99 from CRUTCHFIELD. FOR MORE INFORMATION OnStar.