Testosterone running poor decisions has been the undoing of many men and women. Poor judgement in the effort to show off, rears its ugly head. At some point it happens to us all, it is part of what makes us tick and also so dangerous. My earliest memory of testosterone experience was when I was maybe 5, 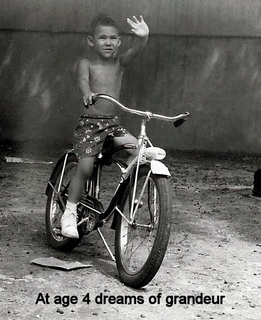 I really wanted to ride my big sisters 26 inch bicycle. She asked me to watch it while she visited a friend. The temptation was too great. I hopped on pushed off and took off on the downhill run on the sidewalk. As momentum turned into speed  I was in ecstasy with the resulting increase, fear gave way to the accomplishment that I was riding a BIG bike! As gravity accelerated the bike, I had to face the reality of figuring out how to stop. I was too small to activate the brakes.  Nearing our house and quickly reaching the end of the sidewalk I chose to run into a hedge as a way to stop. It did not do the bike much good, broke the fork and bent the front tire, I sustained minor scrapes and scratches and had to face the wrath of my 13 year old sister who on one hand wanted to kill me on the other she was worried that I was seriously hurt. I was not and Federico, our handy man had her bike fixed as good as new in a couple of days. This adventure eventually led to me to be a professional risk taker. I have spent a lifetime on the edge and perhaps that may be the reason that the survivor in me figured out early on were the limits are. But most of all, the need to show off always was balanced by the need to do no harm to others. I have done a thousand burn outs at the drag strip, never once on the street or a parking lot full of people, NEVER. I have raced on the streets, but always in a controlled environment. The consequences to innocents in my mind, has always overruled the need to just show off. I am guilty of trying to set land speed records at 3 am, again with the though of doing no harm.

That brings me to the following note from Mark Ritter. As you know we are a huge supporter of Mark's Caffeine and Octane. Here is his note from his website.

Ok guys and girls, time for some facts. First off the event has not been cancelled. Yes we have lost our venue, but I was already working on another location close by. I recognized problems with Mansell Crossing, mainly the lack of Caffeine! Starbucks tried hard and we thank them, but we’ve outgrown the location. 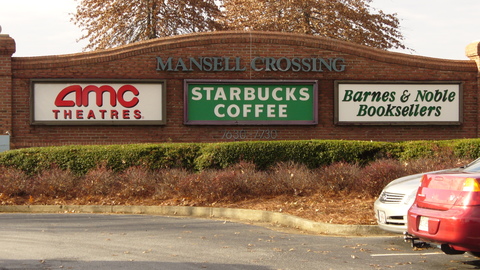 That said though size does it was not the primary reason we were told to leave. For that reason we all need to look in the mirror. We had a number of burnouts, people parked in fire lanes, and the group along the main road egging on departing participants to ” do something stupid!”

As I mentioned I’m working on a new venue, but we need to clean up our act, or the same thing will happen. Frankly I’m willing to try this one more time, but after that… Unfortunately it only takes a few to spoil it for the rest. Before anybody starts pinning blame on a specific group or genre there were offenders of all ages and Marques.

When we do move there will be a lot more police presence. They will not be giving warnings.
More to come soon. But for now keep checking the site and please DO NOT go to Mansell Crossing for the July event.

As one can image, I have been to a large number of car and bike shows over the years and I have developed some opinions of what goes into putting together a good event. The things that impact on positive or negative reactions (that are within human control) include such things as, is it a benefit?, location, cost of entry, music and sound, DJ, food and drink, attitude of staff and attendants, entertainment, vendors, door prizes and trophies, quality of judging, attention to detail, and of course, is every thing is on schedule. In one short year, I have watched one couple go from regular show attendees to running a collection of the finest events in the southeast. 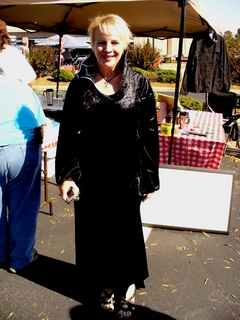 You may say that I am biased as his friend, and I may be a bit; but anyone who knows will agree that Richard (Gunny) and Darlene Scott have developed an array of some of the finest open car shows around. They work together tireless on the details to put together well organized programs. They really do check it all twice, and they get there early enough to do just that.

Gunny has worked for his strong reputation as a top notch car and bike show judge; completing the stringent ISCA (International Show Car Association used by the World of Wheels) training as well as being a trainer for the American Wheels Events Judges Association. Competent judging is important as those of us who have been a participant when a clearly inferior vehicle car wins over a better one, can attest. Show operators who choose “participant choice” awards will tell you that it doesn’t work well as an alternative, either. Gunny leads all the judging and will be able to tell you very objectively what you need to work on to improve your scoring in the future. This is a great service in its own right. 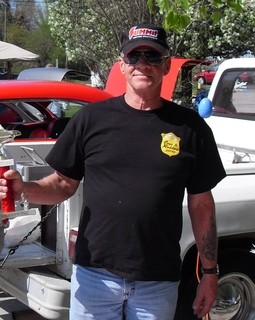 Gunny gives most of the credit to Darlene as being “the glue” that holds it all together. And when Darlene and Gunny get involved with benefits and charities, it is a special event to be sure. There are so many wonderful people out there operating and attending the “wheels events” around the globe, I thought I would highlight a couple, as we stop for a moment and reflect on what, and who, contributes to the making a good event. Thank you Gunny and Darlene. Keep up the good “work”.  Look for them under Prowler Boy Productions; www.prowlerboy.com.

Comment by Miguel Caparros on June 27, 2011 at 8:22am
Hopefully Mike and I will have an announcement in a few days.

Comment by Lehman R Kicklighter on June 17, 2011 at 6:54pm
what an awful thing to happen, but not surprised at all...A group this large draws all kinds of individuals, especially the ones needing to prove something.  Its not enough to have a nice car to show off, somehow their brains think that, if I do a burnout, endanger others, then my car looks even better.  No matter what kind of car you have, there are always something that is faster..just asked the moon-shinners of old....More Police presence, other individuals taking down tag numbers and turning them in....

Comment by Dan Black on June 17, 2011 at 5:24pm
Great Write up Miguel!  And a "Special" Thanks for recognizing Gunny and Darlene. Not only do they put on first class shows...they are good people!!! I truly appreciate their committment to what we do and our love for showing our cars. I've been to a number of car shows throughout the Southeast and have done my fair share of judging car shows in the past and it is never easy to please everyone. But I for one, always have a great time at their events and I believe I am not alone in  my thinking. Thanks Richrd (Gunny) and darlene for all you do. if you have never attended one of their events, I hope you chose to do so soon!!!  See you at a SHOW....

Comment by Miguel Caparros on June 17, 2011 at 5:09pm
Thanks John, if it was only that simple. The reason cruise inns are so well attended is because they are free. Once you start charging money you loose most of the people. It also changes it and just makes it another car show. Then comes the issue of how to pay for the insurance and 1100 partners are hard to mange. Great idea hard to manage.

I say everyone who attends the next cruise in donates $20.00.

Do this for the next 5 or 10 get togethers and use the money to purchase a piece of property in North Georgia where it can be blacktopped and wala!....a new place to meet.

Easy money and I can't think of any car guy complaining about that one.

Announce it heavily at the next event and see what happens, heck, that could even make national news if it actually worked.

That's a bummer, would have been a great place.

Comment by Miguel Caparros on June 17, 2011 at 9:44am
Yes I contacted Cousins who owns all the Avenues. They were not receptive at all and rather rude. They do not care about their customers needs.