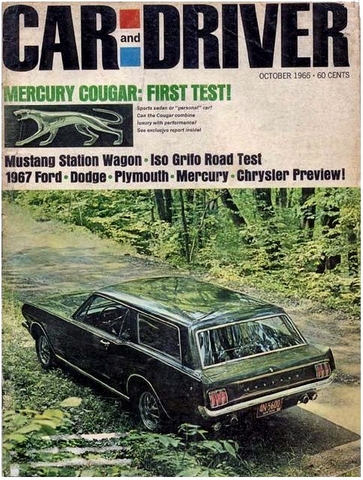 This article was prompted by a posting from Sam Fiorani, another automotive historical journalist on his website, Automotive Travel about the sale of a recently built 1965 Ford Mustang Station Wagon. I remember my initial fascination with the cover and article from Car and Driver magazine 1966 October issue. The car was never officially connected to Ford, but it was commissioned by the account executive Barney Clark of J.Walter Thompson, Ford's advertising agency. The conversion from a GT coupe was done in Italy by the coach works of Intermechanica. Originally sports wagons were know as shooting brakes in England. Wealthy sportsmen would commission local coach builder to build a two door sporty wagon with tailgate from which they could load hunting dogs and guns for some game shooting. Later Volvo actually was the first to take the concept of the sports wagon into major production in 1971 with the P1800 ES. 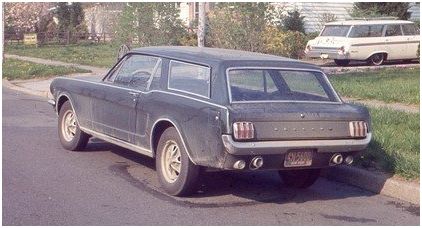 When JWT was done with the car, it was locally sold in New York, where it became a very special daily driver. It was last seen and photographed in a Levittown neighborhood on Long Island. The Red car with the Gold Shelby Stripes is the one in Sam's story. This car had a no expenses job done to it and a modern drive train to make it as useable as any new car.

It is surprising how many individuals have taken it upon themselves to make Mustang wagon conversions. With out really digging to deep, I found 7. 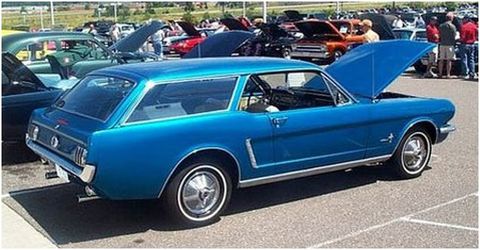 The Blue 65 has a very pleasing look due to the the slender B and C pillars and the well cut and fitted rear side windows. A white Shelby GT350 sparks the thought, if you are going to build a wagon version might as well make it something truly remarkable. 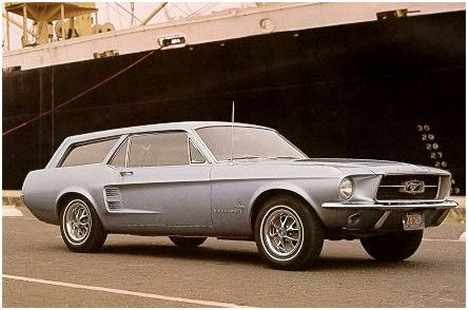 Here is another rendition of a second generation Mustang, this one looks like a 68. Take a close look at this red conversion. The amount of work that it took to graft the top and tailgate from what looks from the photo to be the rear pillars from a 1965 Ford Country Squire. In 65 Ford came up with a system of scooping air from the pillar and directing it across the rear glass to help keep the rear window cleaner. 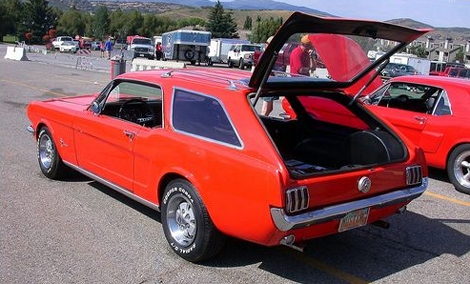 Here is another red one that seems to have taken its roof, side windows and hatch from the AMC Hornet wagon.

I am certain with the exception of the Intermechanica build, the others used existing production car parts. The rear fender kick up of the Mustang adds complication for using sheet metal and glass from existing cars. If I was asked to do such a conversion I would look at several different donors for the rear would be; the Ford Fairmont Wagon, Pinto Wagon, AMC Hornet wagon, and the Chevy Vega wagon. If some one offers to sell you their original Prototype 65 Mustang wagon, walk away, Ford never ever made a prototype wagon. The closest they came to it was this mock up from 1966 but the front looks like the 67 and the rear looks like a Gremlin.

Comment by Michael Thies on June 27, 2011 at 8:54am
Hey Billy, now that is what I call observant. I think you are right! I vaguely remember seeing one somewhere & thinking, how unusual. :-)