Columbo to Peugeot then onto the Carrera Pan Americana.

I know some of my Georgia friends may be surprised that I have a long history with European cars I hope you too can enjoy this aspect of me most of  you do not know.

It is interesting how certain events can trigger memories and the angst of how to put them down on paper. The recent passing of Peter Faulk and the memories lately of Columbo and of his side kick, the Peugeot 403 Cabriolet has stirred nostalgia for what may be Karyn's and my favorite car brand of all time.

My history with Peugeot goes back to my old mentor Claude Meder and Cuba when I was a boy. My father would take me everywhere with him. From the symphony to the chess club then to the shop that he was a partner in where all the exotic cars were sold and serviced. Then onto the errands to drop off a starter at the re-builders and always a stop at Claude Meder's shop where French was the first language. The shop was surrounded by every kind of French car you could imagine and some that were complete mysteries.

Claude came to Cuba as a young man, a political refuge when the Germans occupied France during world war II. A master mechanic that apprenticed with Panhard and Renault in Paris. His knowledge of French cars was second to non. Among the Renault 4CV's the Citroen Traction Avant, a couple of Bugatti's, assorted Simca's and other French makes were the race cars. Claude was also a very accomplished race car driver and his successes in the most car crazy culture in the Americas permitted him to be the representative for Panhard, Renault and Peugeot. Race prepared versions of each of the manufacturers cars were present. A tiny 750 cc Renault 4CV, a not much larger Panhard Dyna, and the big dog of the bunch, the Peugeot 203, still small by American car standards. This was the time of over the road races all thru out Cuba, Mexico, Central America and Argentina. Cuba Was centrally located and was the home base for many of the manufactures team that actually raced what hey sold. Cuba had a very active series of over the road races as did Argentina and Mexico. To put it into perspective, these were full blown over the road rallies with mountain passes, paved roads, secondary dirt roads and high speed 2 lane highways where the fastest cars could reach over 180 miles per hour. Roads through the desserts that could barely be called roads. This is in the era of bias ply tires, drum brakes and no power steering. Seat belts, roll over protection and helmets were optional. My father told me of the Mexican leg of the Carrera Pan Americana road race of 1954, he shared a DC3 chase plane with Chris Economaki and some other journalist. They were using it as a camera platform and crossing a desert in the high plains. The DC3 was maintaining a cruise speed of 180 mph and the Mercedes SL's, Ferraris, Maseratis some of the Buicks and one Studebaker were going faster than the plane.

Claude was a wizard of blue printing engines. He got the most out of the tiny engines the European cars had. What the Panhard and the Peugeot had over the big cars was handling, better brakes, lighter weight, and much less need to stop for fuel. But the secret weapon that no one took into consideration were the Michelin X radial tires. There was no such thing a a sprint race in over the road races. The short ones were 200 miles, the long ones a 1,000 or more. All these reasons where why the small displacement cars of 70 horsepower or less were sometimes threatening the over all winners. I actually got to see Claude driving the Panhard Dyna and then another time the Peugeot 203 where he placed 5th overall, two places ahead of my fathers Austin Healy 100 LM.

Now we can fast forward to the 1960's. I was working part of my summers as Claude's apprentice at his shop in Miami, I was also my fathers crew running the Renault R8 Gordini in road races and I served as navigator in rallies. When I turned 16, Claude used his influence for me to become a development driver for Renault. My first car at 16 was a Peugeot 403. Fathers 1966 Gordini was replace by a new Peugeot 404 in 1968. Then a 504 in 1970. 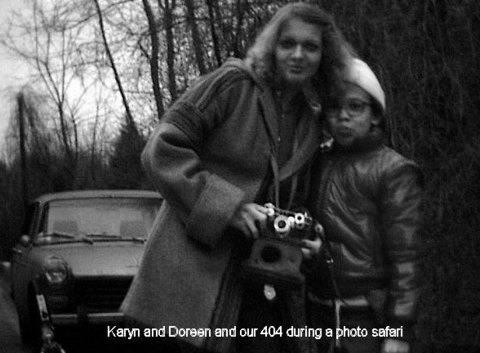 The 68 404 was handed down to Karyn and I in 1973. That was the car she learned to drive a standard transmission on. Our first children were protected by the armor of the 404. In 1982 we sold the 404 with 250,000 miles and still driving and looking like new to a young couple that needed reliable transportation to get married in Texas. Although I drove for Renault I truly enjoyed racing in dad's 404 it was a very forgiving car that only had a top speed of 105 mph but could maintain 90+ no mater the terrain or weather it felt as safe as a brick house.

Although people always associated us with our businesses of exotic cars, Rolls Royce, Ferrari and Porsche, in the back ground was an ex rally car that served the family for 14 years when we wanted fun performance and inconspicuous transportation we had our trusty Peugeot 404.

Comment by Kristy B Belgum on July 6, 2011 at 4:48am
I am also found of European Cars and now i am looking for Used Cars for Purchasing

Just posted a fun video of Columbo and his car.....

Comment by Miguel Caparros on July 3, 2011 at 12:18pm
Thanks Steve likewise. Are you having a restful day?

Comment by Steve Natale on July 3, 2011 at 12:16pm
Great story! I enjoyed your writing as always. Thank you for sharing!