A 67 Plymouth GTX in his Dreams 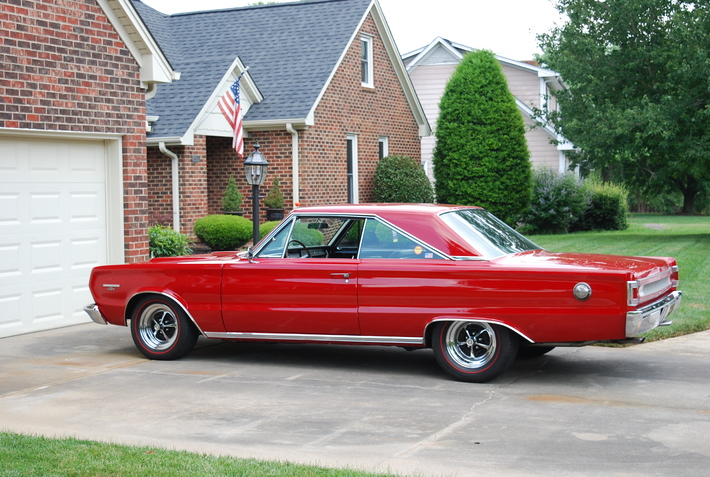 A 67 Plymouth GTX in his Dreams

Clifton Carter's dream car arrived at its new home on June18th. It's a bright red 67 Plymouth GTX. He named it Nyekandu, which means “bright red” in Swahili.

For as long as he can remember, Carter has dreamed of parking that exact car in his garage. Now the car has its own parking place painted green, since he's an Eagles fan from Philadelphia originally. An older friend had a 67 green Plymouth GTX that Carter wanted so badly, but was too young to drive at the time. He ended up buying a Dodge Charger instead, many years ago. He is obviously a fan of MOPAR. “Then, about a year ago, he decided to search for his dream car online again, and he found it at the Gateway Classic Cars website. What made it his dream car? Carter says the previous owner maintained the original configuration of the GTX, and did a fantastic job of restoration, paint and interior. In addition, Garth at the Gateway Classic Cars of Atlanta showroom, was so attentive on our phone calls, provided guidance, as well as “The Story” that it was an easy decision. To find your dream car is one thing, but to continue The Story with this car was meant to be! The previous owner was proud to know this car found the new home it deserved, and more so, to the man who earned the privilege to take on her care. Carter spent 30 years in the Navy as a Navy Corpsman and retired at the rank of Master Chief Petty Officer. His duty with 1st RECON, 1st MARDIV (Marine Division) and Command Master Chief, III MEF (Marine Expeditionary Force) were the best tours of his career. He and his wife, who is also a retired naval officer, now live in Burlington, North Carolina. He is an active member of the Alamance County Veterans organization called ALCOVETS. The organization is non-profit, with the goal of supporting Alamance County veterans and their families. Carter says,“I may put her in short veterans' parades for the first year, but that '67 GTX is so pretty that car shows will be in her future.”