By Miguel Caparros
See the on track video
Renault is taking the Alpine A 110-50 back to its roots.  A race car you can drive on the street, with a 400 HP V6.  This prototype is based on the Megan Trophy racer and is supposed to be very close to what will be produced.  A bare bones track ready car for club or production car racing, that can also cruise to the market. The debut was at the Monoco Grand Prix circuit where Carlos Taveres did a nice smoky burn out and drifted his way to the first turn. Not bad for being the Renault's Chief Operating Officer, "Its good to be the King". The last Alpine had taken a turn to a luxury sport about with okay power and fair looks. Not the brawler that the original A110 was. A look that preceded the 911, in a smaller lighter package with engines ranging from 1100 cc to 1800 the super lightweight made the Alpine A110 a giant killer. 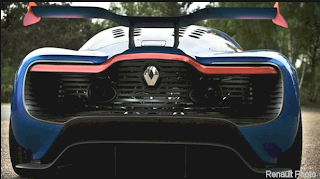 The new car is aggressive from every direction. From the aero nose and spliter to the roof air intake,  the front of it looks like all business. I may want to put a wire grill on the roof scoop to ensure I do not suck in one of the cats. With a flat bottom and rear tunnels this car is very serious.  The adjustable wing just gives you one more thing to think about. This is purpose built unlike the original Alpines that were based on Renault production car platforms from the 1950's 4CV and 60's R8 R10 platform. What those cars achieved with their humble beginnings makes one wonder what the new one will do. The A110 was first unveiled at 1962 Paris Motor Show. The new car used many of the up coming R8 parts including a reinforced platform with a steel backbone. 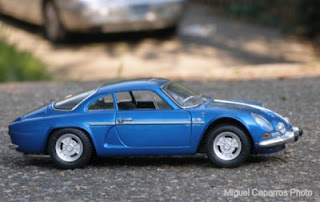 Those R8 parts were state of the art at the time, including 4 wheel disc brakes twin control arm front suspension, a self centering rack and pinion steering rack. Possibly the thing that made the Alpine such a giant killer was the R8 5 main bearing wet sleeve design when coupled to the Gordini designed aluminum hemi head turned the 50 horsepower economy motor into a 120 horsepower beast. The body was completely fiber glass and the super lightweight versions had plexy glass windows and windshield. Even today the A110 is one of my favorite cars very forgiving at the limit, although I think the limits of the New car may be just a  wee bit higher. Happy 50th anniversary.
See the original racers