Weather is tricky for any outdoor gathering, but March is particularly fickle.  I arrived to set up at the Caffeine & Octane gathering in Alpharetta, GA on March 6, 2011 a little early because I thought I might need time to set up in the drizzle rain. Of course the lot was empty but the drizzle had now strengthened and the breeze was more like a gusty wind. The weatherman had said it would be light and even would stop by 8am.  It was still dark, so we had some time to let it stop.

A sweet little Karman Ghia convertible swung into the shopping center parking lot where we meet. He did a large slow circle and hesitantly left toward the main road. I said to myself that he is off to get breakfast. If I were hungry I would have myself, because I would not be putting up our popup tent in this breeze!  I waited for it to stop. I noticed that the temperature had dropped a bit.  It was 55 F when I started from home and it was already down to 48.

I had sent out the weather report on an email blast, encouraging our friends to come out even with the rain, because weather.com said it would stop at 8am. I hoped they were right because it didn't look right then like it wanted to stop at all.  Then I saw a trio of BMWs pull in. It was my friend Jackson Pike and two of his friends from his shop in Sugar Hill, the "Not On main Street Garage".  The rain had slowed to a drizzle again and the breeze had softened some, but not enough to put up the tent. We stood it the drizzle with umbrellas and talked about how crazy we were to do this. Why is this so much fun?  We were all grinning.  Jackson has a collection of beautiful BMWs and Mercedes.  If you are ever in the area, stop by his shop and see them.  He is always willing to stop and chat with visitors.

It was getting light by then, and the Butler Tire folks arrived. Starbucks opens at 7am and we stood at the door while they picked up the coffee urns to take to their vehicles. They had a conclave with a red Charger, a Mercedes, an Audi and a BMW Diesel. The designed wheels and color combinations were remarkable and all the cars all looked really hot.  I got to look a bit at the BMW and it is a looked gorgeous, yet what a sleeper with the turbo diesel that can smoke a Corvette at any light!  The Butler Tire team are real pros and were there having a good time in spite of the weather. They were talking, laughing and giving out free Starbucks; and set the tone to for the whole gathering!

About then the Karman Ghia returned from breakfast.  The owner's name was Walt and he told us that this rebuild was his tenth in ten years! He was very entertaining with his experiences with a variety of vehicles, especially with kit cars. He reminded me that there is a kit car show in Carlisle PA each year. That would be a fun event, as well.

The drizzle continued!  It was getting toward 8am and it didn't look like it would stop too soon.  I was getting teased a bit for my weather report email, but I was told the radar looked good for it to quit at about 9am. The surprise was that cars had started coming in and lining up anyway. There was line of Porches and lines of various tuner cars, numerous cool Minis, several Ferrari, a VW bug and a VW van. There was a pretty good selection, considering, though not that many older cars.  We had a great looking black Studebaker Gran Turismo Hawk pull in and cars were pulling in pretty regular by then adding perhaps up to 75 or 100 cars. Of course it was nothing like previous months, but guys, it was STILL RAINING!  It was amazing to me that we had anybody coming in at all! 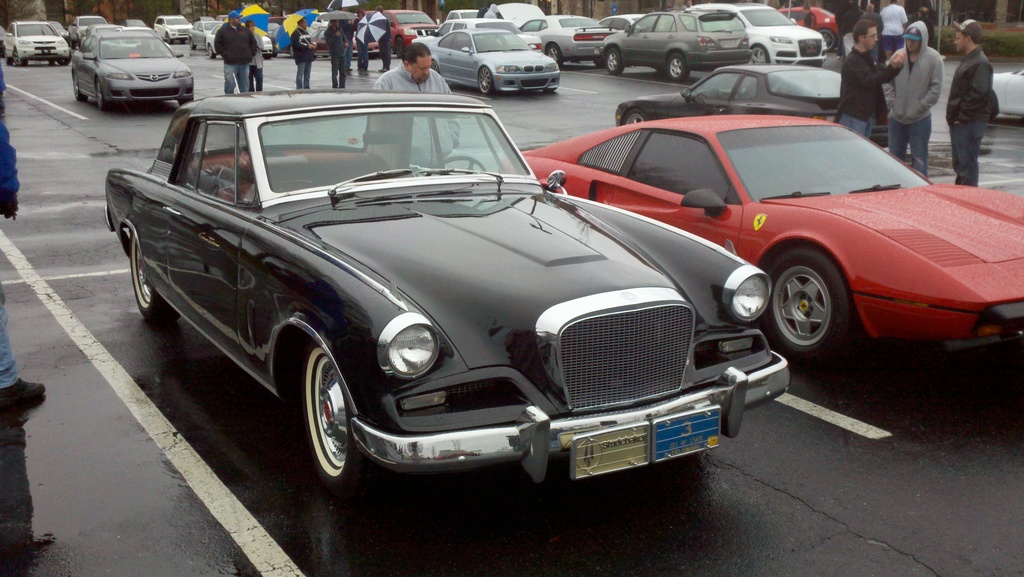 I was too busy talking and looking to notice the exact time the rain finally stopped. I guess the 9am prediction was pretty good. We had been able to put up the tents some time before the rain drizzle stopped.  It was good that the rain was not too strong, it would have certainly chased everyone out. Once the rain fully stopped and the clouds started to break up, the sun actually came out to cheer up the morning!

It was a remarkable event in that so many cars and folks showed up in spite of the weather.  Some estimated as many as 200 great vehicles took part in the gathering, coming in and out all morning. By the time I left at 11:15 or so, they were almost all gone.  I went in to say goodbye to my friends at Starbucks and headed home. They are a great crew at that Starbucks and when you get by there, tell Sheila and her gang a Hello from Big Mike!

Comment by Michael Thies on March 16, 2011 at 3:28am
Here are the photos I took that rainy morning. I took only a handful so here they are. http://southeastwheelsevents.com/photo/albums/caffeine-octane-march...

Comment by Michael Thies on March 9, 2011 at 5:45pm
Yeah Troy, me too! And there we had Butler Tire with big urns of Starbucks giving it away! Paradise :-)

Good write-up, sounds like good time had by many. Heck, there have been times a made a run to starbucks

in trenchal downpours just for the coffee.

Comment by Michael Thies on March 8, 2011 at 9:50am
Here is another video from Sunday morning featuring wheels by Butler Tire. Check it out http://southeastwheelsevents.com/video/butler-tire