Syre Perkins, JD, is a inspiration. I met him at a recent Caffeine & Octane where he was showing one of the more unique vehicles that I have seen in quite some time. It was a remote-controlled robot that picks up a full-sized car, with basically zero clearance, lifts it and moves it! I learned that TARVA, (Tow Atlanta’s Recovery Vehicle Autobot-Robot) can go into low clearance parking decks/garages and other tight areas where vehicles may become disabled and physically carries them out. TARVA is only the second robot of its kind operational in the United States! It makes getting vehicles out of tight areas and low clearance parking decks/garages with cramped space easier and will cut the time and physical effort required to get vehicles out of these areas significantly reducing the risk of physical injury & property damage.

I had to meet him. As I quickly learned, like many life-long “car guys”, is a very creative builder. He is a man whose tow vehicles are as clean as any show car! He really stood out among the toys at C&0. While he wasn’t ultimately interested in practicing law, he did finish a Juris Doctorate. Impressive, yet he wanted, instead, to work in the car world. With early advancement in automotive management, he took over the Fleet Operation for AAA in 2009! As an aspiring entrepreneur (and clearly an inventive car guy), he left in 2014 to start his own specialized towing company in Atlanta.
I was fascinated with his robotic toys, but what really got my attention is his invention of a special enclosed vehicle carrier. We all know we want our “babies” carried, when needed, over the highway in closed vehicles. Anyone bigger than my 6-year-old granddaughter, knows what a pain it is to drive (or winch) our car in, and then get out without damage…to the car or our backs! I have known some folks who had to climb out the driver’s side window! 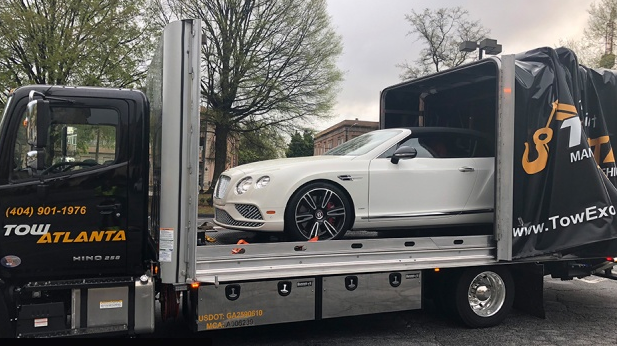 Syre invented a carrier with a sliding cover, so he could bring the car in and easily get out and then slide the cover back to give the protection we want to have. He has already become the carrier of choice for all the high-end new car dealers and for the exotic car owners in Georgia. He has now got the attention of antique and classic car collectors with his work helping move cars for the Atlanta Concors d ’Elegance. I am eager to see what he does next!